The Truth, The Media, and You 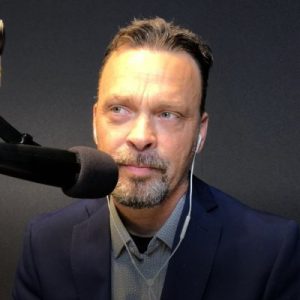 After more than two decades as a broadcast journalist, Tom Jordan says there’s been a blurring of the lines between truth, right and wrong.

“I don’t think that’s our job as journalists.”

“The ‘right and wrong’ is where I think a lot of journalists have gotten mixed up,” says Jordan who begins a new program on WJR-AM Radio in September. Our job as journalists is to get the facts – what’s true – and then we bring that to the audience. And they, based on their own premises … they can assess for themselves what’s right and what’s wrong.”

For a journalist to decide a moral absolute would be counterintuitive. The industry was not designed for that, says Jordan.

Tom Jordan: “That’s what kind of concerned me. I want to get back to just allowing both sides to talk, all sides … I always tell people, ‘You as an individual – you are so much more valuable than your political position, our disagreement. To me, you mean so much more. This disagreement, if we have one, doesn’t even come close to interfering with our relationship.’”

Ken McMullen: “How would you verbalize what compassion is?”

Tom Jordan: “I truly believe, and I think the evidence bears it out, that compassion is learned within the family … And the family structure is where we learn, I think, the most important lessons of life … just think about the basic lessons of family life: You get up, you have done your chores … It’s not just for your benefit … we’re training our kids to care for themselves. Why? Because once they learn to take care of themselves, they’ll also learn to take care of other people.”

In both family and professional life – facts matter, says Jordan. “I think what I’ve observed as a husband, father, and journalist – we need to simply observe the truths of a situation, use discernment and compassion when making them known, and let the chips fall where they may.”